Amazon experienced a cloud computing outage on Tuesday that showed the world just how much it relies on Amazon and its services.

According to CNBC, the outage started around 11 a.m. EST and lasted until 6:30 p.m. Amazon Web Services’ status page stated that it was having issues primarily in its main US-East-1 region.

While the general public may not know much about what the AWS cloud-computing system does or about its existence at all, many users still felt the effects of the outage when trying to use some of their favorite websites or apps.

AWS is a host for institutions such as universities, governments, and companies, according to the Associated Press. When the hosting system goes down, its entities follow suit.

Users had trouble streaming when using Amazon Prime, Disney+, or Netflix. Work and academic performance were affected by the outage of Slack and Canvas. Users could not even access finance-based apps like Coinbase or Robinhood.

The outage disrupted the company’s retail operations as well, as warehouse and delivery workers were unable to scan or deliver packages. Workers were instructed to just wait until services were up and running again. This was unfortunate timing with the holiday season in full-swing.

In the midst of the outage, users took to social media to express their concerns, commentary, and frustration.

Some took this opportunity to criticize the amount of companies and institutions Amazon has a monopoly over.

Seeing how many daily operations were affected by just an hours-long shortage puts into perspective how much the world, more specifically the United States, relies on Amazon. It really poses the question of what would happen if the outage lasted days or weeks instead of a few hours. Or more hypothetically, what would happen if Amazon shut down for good?

With these questions in mind, the more important notion to ponder is: what should be considered a monopoly?

Ring, an Amazon’s home surveillance company, has received a lot of backlash for how the company has partnered with over two hundred law enforcement agencies. As a result, Police officers who have partnered with Ring’s Law Enforcement Neighborhood Portal, have access to an interactive map that allows police to request camera footage directly from residents without obtaining a warrant.

Ring, has helped police bundle theft sting operations and assisted police on get their hands on footage without a warrant. Individuals who testify against their neighbors are also gifted free cameras in return. People are fighting and mobilizing against Ring partnerships with Police.

A digital-rights activist group Fight for Our Future, is helping by getting people to demand local governments and police departments to stop making partnerships with Ring. In addition to new regulations, and a congressional investigation into the company, over 30 civil rights groups have signed an open letter to demand an end to Ring’s partnering with law enforcement officials.

The music streaming industry has long been dominated by the three companies Spotify, Apple Music, and Amazon Music. Since its creation, Amazon Prime Music was only available for use by the companies Prime members. In a move that many media researchers believe is to step up the game against Spotify and Apple, Amazon is now offering its music streaming service for free to anyone (none-prime members) who download the application on IOS/Android devices, Fire TV, and online.

Of course like its competitors, the free download and use of the music streaming service comes with advertisements in order to continue to listen to music.  The service will be available to anyone in the U.S., U.K. and Germany and offers the same 2-million song catalog as Prime Music, with the exception of Prime Music being ad-free for users that are subscription members to the companies services.

“Expansion of the free-with-ads Amazon service will expose more consumers to Amazon’s music, who can then be promoted to join Prime to get the ad-free Amazon Music free — or to upgrade to Amazon’s more premium music services” (Lukovitz).

Many believe this expansion of the free-with-ads service will expose more people to Amazon, which in turn will lead to the promotion of these consumers to become a prime member for ad-free music or maybe even taking it a step further to the Unlimited or HD service.

I believe that the music streaming service is only becoming more popular with many of these media giants targeting their members with subscription based services in order to gain revenue and customer loyalty which is essential in today’s digital world. All three of these leading music streaming services constantly are looking for an upper hand to their competitors, and Amazon appears to have just moved towards leveling the playing field.

Amazon Prime has announced that two seasons of animated series Critical Role will be made available exclusively on Amazon Prime Video. The series, created by voice actor Matthew Mercer, was originally a web series that premiered on YouTube and was streamed live on Twitch. In the series Mercer and several other veterans from the voice acting industry play Dungeons and Dragons. Fans of the series funded a Kickstarter campaign to animate the very first episode of the series but was so successful that they were able to fund an additional 9 episodes. Now Amazon is providing funding for an additional season and both be available for streaming. Voice actors Laura Bailey, Taliesin Jaffe, Ashley Johnson, Liam O’Brien, Marisha Ray, Sam Riegel and Travis Willingham will all be reprising their roles in this new series, as well as serving as producers on the show.

To me this is a great decision for several reasons. I have always enjoyed animation, and I feel this form of storytelling has largely been left unexplored or underutilized in its current form. I am glad Amazon is willing to risk an animated series where other companies may be more hesitant. Though Netflix often is credited as the innovator in the streaming world, I am glad to see that Amazon is willing to bring unique and creative content to their platform. I think this move is also a testament to how far web-based content has come. Years ago, the idea that YouTube was a creative but not very viable outlet for content. Now with this move and the rise of the YouTube celebrity, web-based content is demonstrating that it is a media market with a vast potential. Finally, as a fan of Mercer and his show, I am glad to see that it is getting the mainstream attention it deserves. 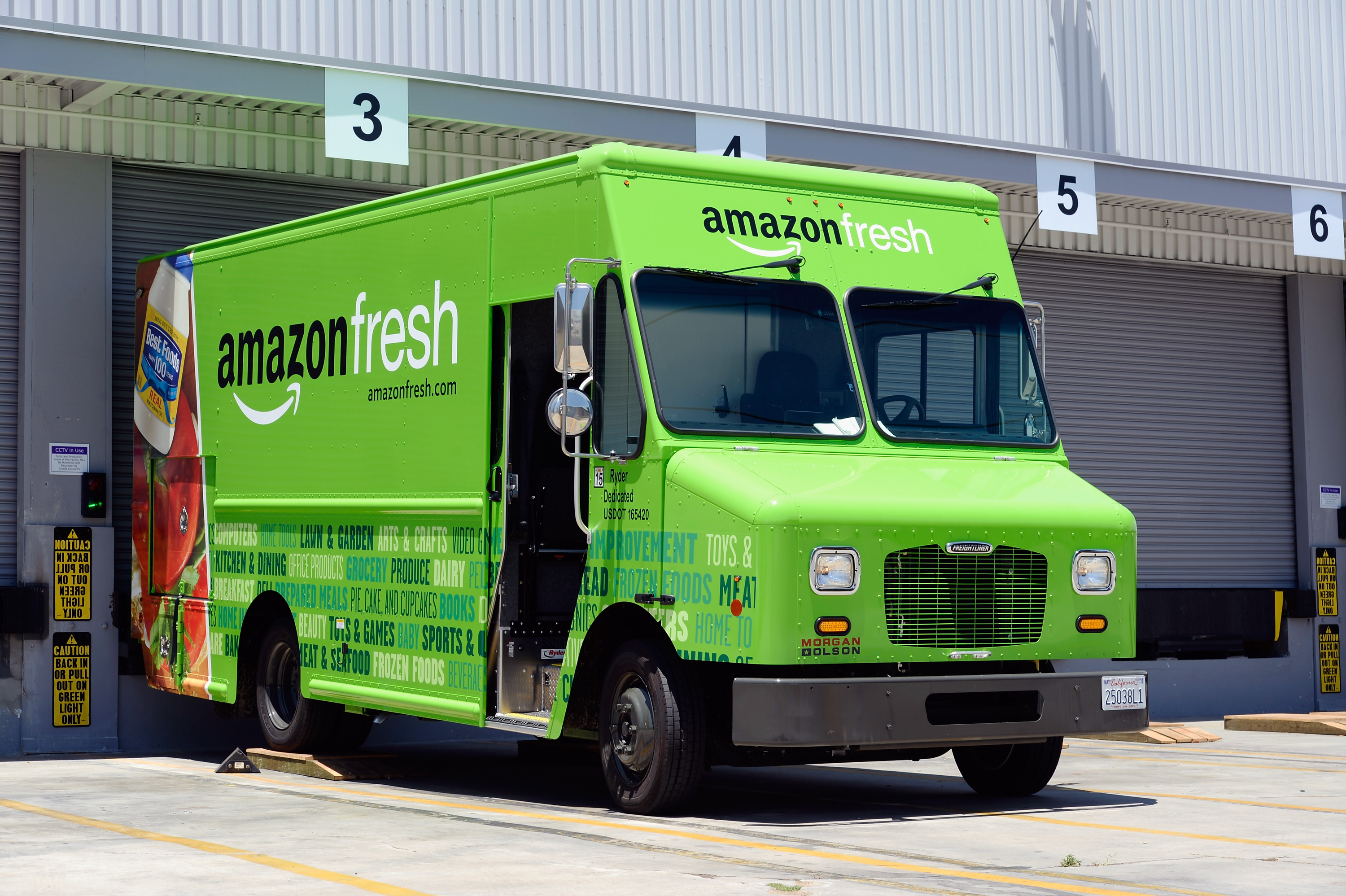 The heavily praised multi-dimensional company, Amazon, is currently facing some backlash after customers received expired food. According to CNBC, “Interviews with brands, consumers, third-party sellers and consultants all point to loopholes in Amazon’s technology and logistics system that allow for expired items to proliferate with little to no accountability. Consumer safety advocates worry that as the marketplace grows, the problem will only get worse.” This is a major issue considering that 58% of Amazon’s sales are food-related. There are policies that these third party sellers are supposed to abide by when it comes to food expiration but the question is how much Amazon is doing to enforce those rules. Customers have complained about a wide variety of food expiration that includes anything from Tevanna tea bags, yogurt, baby food, Doritos and so much more.

In order for Amazon to stay in the online grocery business, it must maintain its customer’s trust by ensuring quality fresh food 100% of the time. However, many people suggest that this could be the downfall of Amazon’s food business if policies are not enforced thoroughly and as soon as possible. A spokesperson for Amazon says they use a combination of A.I data and human monitoring to tackle any issues that may arise and they strongly encourage anyone with an issue to contact Amazon support directly so proper action can be taken.

Amazon has announced a series of wearable internet of things products including glasses, headphones, and even a ring. The company also announced new speakers and other Alexa products. Amazon has been known to release more affordable virtual assistant products than their competitors, such as Apple, and they are trying to continue to be the leader in this category.

At first glance, it’s not hard to confuse the Echo Frames as some sort of attempt at making a successful version of the failed Google Glass. However, the Echo Frames are merely a way to access Alexa without having to use your hands. They feature only a microphone and speakers. If they become successful, it is possible that a camera version could be released, though the bulky look of the Frames make that hard to see happening. The starting price for them will be a steep $180.

Echo Buds are Amazon’s competitor to Airpods. They are handsfree earbuds that feature Alexa capability as well as a Bose sound cancelation feature. Echo Buds will sell for $130.

The Echo Loop is the most absurd product of them all. Amazon is taking an even larger leap with this Alexa enabled smart ring than they are taking with the Echo Frames. The Loop has basically the same capabilities as the frames, but with the added benefit of looking like a lunatic while speaking into your hand in public.

Alexa will also be getting new computer learning updates.