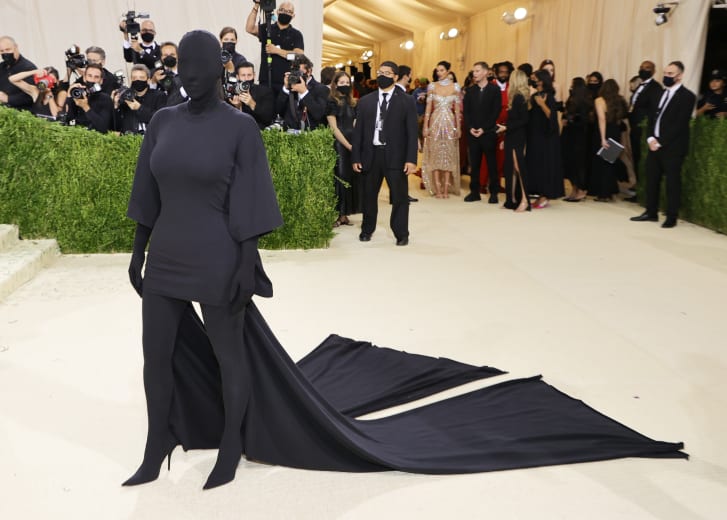 Kim Kardashian stepped foot on the red carpet at the 2021 Met Gala in a black T-shirt dress with black gloves and stockings. The most amazing aspect to her Balenciaga creation was her anonymity. Although she technically arrived alone, a mystery man from Kanye West’s office, a stand-in for her famous ex-husband, accompanied the iconic Ms. Kardashian. Although they were totally enmeshed in fabric, Kardashian was immediately recognizable by her silhouette.

The internet had trouble putting together her outfit with the Met Gala’s evening theme, “American Independence”. Many wondered if the clothing choice was a commentary on the Black Lives Matter movement. Kim Kardashian took to social media, posting a picture from the Met Gala which was captioned, “What’s more American than a T-shirt head to toe?!” This was the only public statement she made.

The fans were not impressed as no one knew what it meant. Instead, they tried in vain to piece it together themselves, which resulted in viral tweets, with some fans comparing Kardashian’s outfit to a Harry Potter Dementor.

It is curious that someone so famous is recognizable even while completely incognito. The Kardashians are an internationally known pop culture staple. It is an interesting commentary on our society as a whole that we are so fascinated by celebrities. Even when they try to hide themselves, they are still recognizable. The media helped make the Kardashians a household name by conditioning the audience to see them, even when we cannot. It remains to be seen whether Kardashian will ever reveal what her outfit is about, whether it was a commentary about celebrity anonymity or even a statement about wearing a face mask in the age of COVID. No matter what, Kardashian’s ability to create a buzz could be a good study on human behavior.