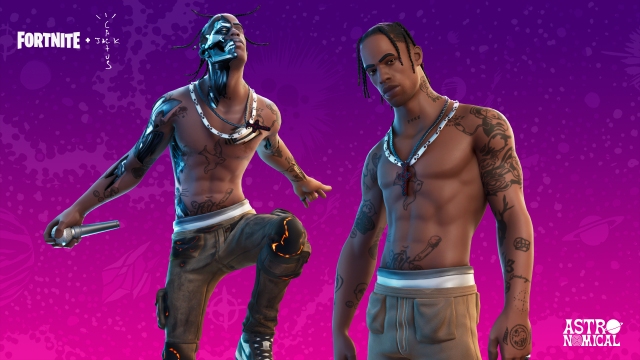 Last night, on Thursday, April 25th, rapper Travis Scott held a live concert in the online Battle Royale game, Fortnite.  The announcement was made earlier in the week in order to build up the hype fore the event. Fans entered the sever and found themselves in front of a virtual stage. Soon after, Travis Scott’s giant avatar appeared and started to perform “Highest in the Room” and “Sicko Mode”. According to Epic Games, in a ten minute virtual performance, Travis Scott amounted to 12 million players participating in the event, along with 3 million people streaming the show. “The vast audience for the performance beat the previous Fortnite music event, an in-game gig by electronic dance music artist Marshmello in February 2019, which attracted more than 10 million viewers (Stuart, 2020).” As the concert came to a close, he surprised the audience with a new song called “The Scotts” featuring Kid Cudi.

This event, however, was not just a one time performance. Now named “Astronomical”, this nuanced music festival is scheduled for Friday, April 24th, at 3pm, and Saturday, April 25th, at 5am, 4pm, and 11pm. With the overall success of an online performance, this concert can open the door for many more artists to take advantage of virtual concerts to amass some of the largest audiences in history.

Following his performance on Thursday, Travis Scott tweeted, “HONESTLY TODAY WAS ONE OF THE MOST INSPIRING DAYS. LOVE EVERY SINGLE ONE OF U GUYS. AND I KNOW TIMES ARE WEIRD FOR US. BUT FOR ONE MOMENT TO BE ABLE TO HAVE THE RAGERS TO RAGE WHERE EVER YOU ARE IS AMAZING.”